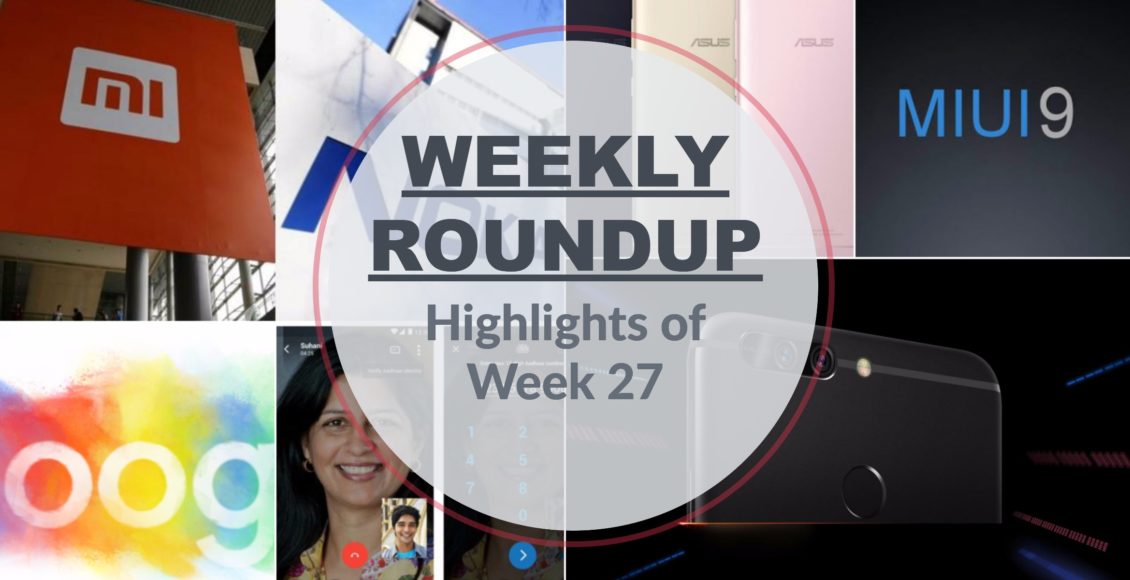 Surprisingly, last week was a busy one. We thought that there won’t be much announcements and launches. But many of the brands including Samsung, Vivo, Asus, and Huawei. Motorola is preparing the launch of their new phones on 25th July. Google’s pixel devices are getting July security updates. Nokia and Xiaomi announced their collaboration for using Xiaomi chipsets in Nokia devices.

Here are the top stories we would love to discuss in this weekend from past week:

Nokia and Xiaomi announced that they are been ready to collaborate. Also, the consignment letter had signed. Both the companies will share their license on their cellular standard-essential patents. The deal parted Xiaomi to acquire patents assets. Read more.

As promised, Microsoft has brought Aadhaar based verification system to Skype Lite app for Android devices. Starting today, Skype Lite users should use their Aadhaar number to verify their identity while communicating with another Indian individual using the Skype Lite Android application. Read more.

Asus unveiled their new series of smartphones. Today, Asus unveiled the first member of their big Zenfone 4 family. This is one of six phones to come. The new Asus Zenfone 4 Max comes with a massive 5,000mAh battery and a dual camera setup on the rear side. Read more.

Mi 6 Plus case covers leaked, We are very close to the official launch

The newly leaked yellow colored case cover has been designed for the Mi 6 Plus smartphones. So it looks like we are very close to the official launch of the device in China. Read more.

The Honor 8 Pro is sleek and thin in design. The 2.5D Glass and metal body will take the phone to the sense of beauty. The ultra-thin 6.97mm metal body functions perfect blend of functionality and aesthetics. Read more.

Google rolls out new appearance for Android Search; only for selected users

Google has released a new appearance and animations for Android mobile Google Search App for selected users. However, this may be a test roll out or something initial like beta testing.  While search results, the results are showing smoother and softer. A rounded edge view of the window and four colored little dots creates the notion of Pixel and Pixel XL. Those correspond to the Google Logo as well. Read more.

Xiaomi to launch MIUI 9 Based on Android 7.0 Nougat Before August 16

Finally, here is the answer for a most frequently asked question. Xiaomi’s official MIUI forum has confirmed that the company is planning to unveil the MIUI 9 based on Android 7.0 Nougat before August 16. Along with the date announcement, MIUI moderator has addressed the rumors and fake news about the MIUI 9. Read more.

This week was really exciting. Especially, Honor 8 Pro is here to conquer the smartphone market. Overall, the week 27 was a very good week for the tech world. Let’s expect something more in the next week. Share this with your friends..

Moto G5S Plus leaked with a 5.5-inch display and dual rear cameras.