Hi there. Welcome to Android Hits weekly roundup. Here we are discussing the important things that just happened in the past week. Week 29 was really awesome for us. Because Android Hits and all of our network sites are now on SSL. That means, your connection to Android Hits is secure. So the data you share between your device and Android Hits will be secure always.

Here are the top headlines of week 29:

Samsung is sending out media invites for the launch event of Galaxy Note 8. As expected, the new Galaxy Note 8 is coming on August 23. The event has been scheduled for August 23 in New York City. The invite card hints a 2:1 Infinity Display, so it might have a similar display of the Galaxy S8.

Chinese smartphone manufacturer Meizu has officially teased their forthcoming Flagship smartphones Meizu Pro 7 via the company’s official twitter. The smartphone was there in the flourish of leaks and rumors that the corporation was working on to deploy a stunning secondary screen to display. Now with the latest teaser by the company official itself, the official launch date of the device revealed and the devices physical appearance and aspects have been confirmed with the new leaks.

Earlier last week, the Taiwanese OEM HTC and Internet giant Amazon have joined their hands to bring the Amazon’s own Voice Assistant platform based on Artificial Intelligence to the smartphones. As a part of this, the HTC had rolled out the Alexa support for their latest ‘Squeezable’ flagship HTC U11 in the USA. The service is not actually standalone yet, integrated with HTC Sense App service which will work as a full-time service. The Smartphone Alexa on HTC U11 will be rolling out to more markets soon.

The PiP (Picture-in-Picture) mode for apps is being developed by their corresponding developers, ahead of the Android O launching. From the developer previews for Android 8.0 O, it was very obvious that the Google is developing a default OS feature for PiP mode. We already have seen the same features in VLC and Facebook mainly. Now, it is reportedly saying that the Whatsapp is also in the workshop to bring he PiP mode in an upcoming update. The new feature is currently working only on Beta 2.17.265 version, installed on Android O developer previews.

After the return of Nokia brand via HMD Global, we started hearing about tons of rumors regarding many devices. Most of them were about the flagship series devices like forthcoming Nokia 8 and 9. But, the Nokia 2 is the least discussed or even no one ever thought about, a smartphone from Nokia and the devices’ images have been leaked this week. As of the Nokia device nomenclature patterns, the Nokia 2 must be a budget friendly device with specifications far below compared to Nokia 3.The smartphone will be powered by only a Snapdragon 210 and almost 1GB RAM.

After the official unveiling of Essential smartphone from the original creator of Android Andy Rubin, many people have been waiting for the device to come out officially in solid form to know more about it. At the same time, many were waiting for their device to be shipped. The Essential will create a big threat to the upcoming flagship smartphones like Nokia 8, Galaxy Note8 and Apple iPhone 8, commented analysts.

As usual, we have chosen couple apps for our readers from last week.

Holo, as the name suggests is an app designed for creating Holographic videos. It actually helps in creating Augmented Reality videos with Hologram like objects along the video. You can add real humans, animals, architectures and many other characters to the video you shoot. You can really find some fun and can test your creativity using the Holo App. 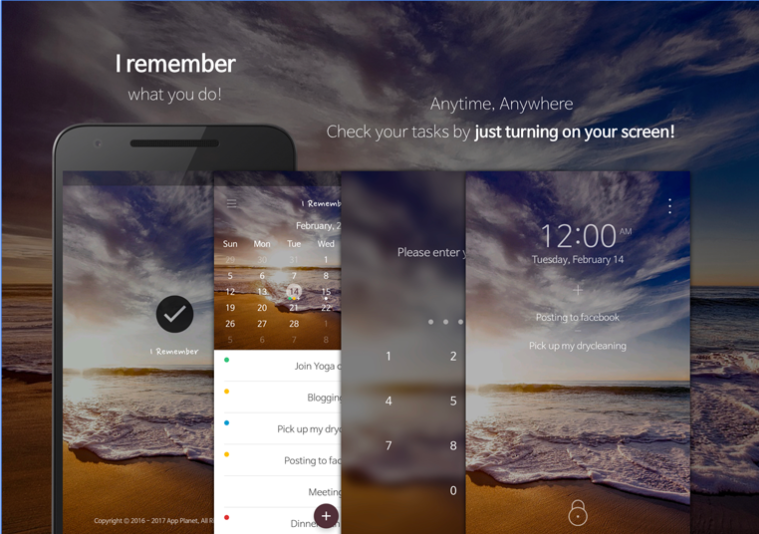 I Remember is a redefined version of typical task reminder or to-do-task apps. Instead of just listing down every task we have to do, the app will function from both lock screen and Home screen. It also acts as kind of lock screen, also can overlay on lock screens. So that you will be reminded about the tasks remaining to do whenever you turn the screen of the smartphone on. The app also sports various kinds f beautiful wallpapers. The app is just easy to use, and additionally, you will get daily motivational quotes right from your lock screen.

Deal alert: You can now get £50 discount for the BlackBerry KEYone in UK

HTC U11 Sapphire Blue to go on pre-order in India