Galaxy Note 8 (SM-N9500) is the next big thing coming from the Korean Smartphone Manufacturer that is most anticipated to get official soon. Mean while the device is now found listed on the benchmark listings of AnTuTu and GFXBench Benchmarking Sites revealing its specifications. 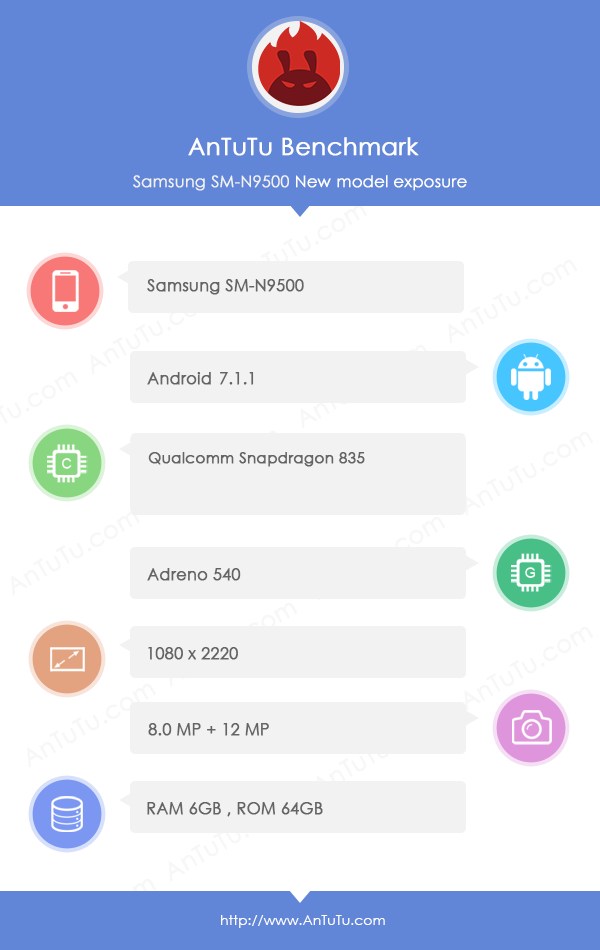 Reportedly the latest spec-sheet belongs two different models of the Note 8, one listed on AnTuTu finds out to be the US model with Snapdragon 835 SoC and on the other one from GFXBench is with Exynos 8895 SoC. The latest leak throws us tips to its camera department and other basic features.

From the AnTuTu listing, the Galaxy Note 8 will be running on Android 7.1.1, powered by the Qualcomm Snapdragon 835 SoC coupled with Adreno 540 GPU and 6 GB of RAM. The device has the similar internal storage capacity to the Galaxy S8, which is said to be of 64GB. Coming to its photography features the Note 8 sport, 8-megapixel front camera as well as a 12 Megapixel rear camera under the hood. It is not sure that it will have dual-camera or not, from the spec-sheet.

While the leaks from AnTuTu pops out, the latest listing on GFXBench makes pretty much similar spec-sheet of Samsung Galaxy Note 8 that eventually concludes these are the original specifications of the upcoming Note 8.

As mentioned above, GFXBench listed the Note 8 powered with Exynos 8995 chipset, which is an octa-core 2.3GHz CPU with the ARM Mali-G71 GPU. The Galaxy Note 8 will sport a 6.4-inch screen with Infinity Display having the resolution 1440 x 2960. Even GFXBench finds these in similar, running on Android 7.1.1 themed as Android Samsung Edition, 6GB of RAM (5.3GB Available Memory), 64GB of ROM (53GB Available In-Built Storage), 12Megapixel camera in the rear panel, and 8 Megapixel sensor as the front shooter.

These Benchmark Listings reveal Samsung is coming with another premium smartphone with the much bigger screen, the device is most expected to be unveiled on August 23.