Huawei to launch Honor 9 in India on 5th October

Honor India has been releasing so many teasers about their upcoming device. Also, they had sent out event invitation for the media for the launch of their new smartphone in the country. But the device name was unclear until now. Everyone including us was believing that it is the Honor 7X, the successor of company’s best-selling smartphone.

Now, Honor Smartphone’s official Twitter account has accidentally revealed the device name. In a reply to a user’s question, Honor Global said that they are going to launch the Honor 9 in India on 5th October. A few minutes later, the official Twitter has deleted that tweet. So that was an accidental revealing. But, the user has taken a screenshot of that tweet. 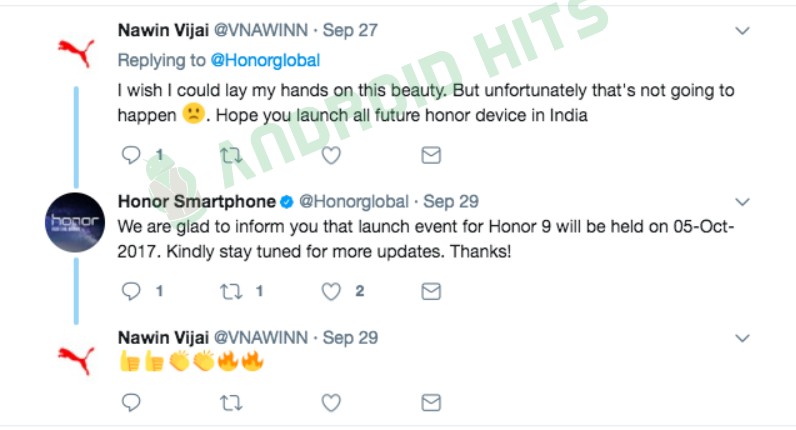 Honor 9 sports a 5.15 inch Full HD display. The device’s spec sheet seems similar to Honor 8 Pro. The smartphone is powered by HiSilicon Kirin 960 SoC with 6GB RAM onboard. There is also a 4GB RAM variant, providing internal storage options of 64GB and 128GB. The rear camera is same as we reported earlier, with 20MP + 12MP sensors. The 20MP module is defined to capture images, while the 12MP helps to enhance the image with more details as well as Bokeh effect. The secondary camera department on the front panel, made to take selfies carry an 8 Megapixel sensor.

Nokia 2 Price in India: Features, Specifications, and launch date of Nokia 2 in India