Nubia Z17 Mini is a good dual camera smartphone with some good midrange specs. However, not good as the competitors

By Akhil G Last updated Jul 18, 2019
11
Share
ZTE owned Nubia brand is very active in Indian market nowadays. They have been launching so many models in India. Because of the premium design and unique features, Nubia devices are now getting a real space in the Indian smartphone market. Nubia Z17 Mini is a recently launched smartphone, and now we are reviewing it for our readers. This is our Nubia Z17 Mini Review. 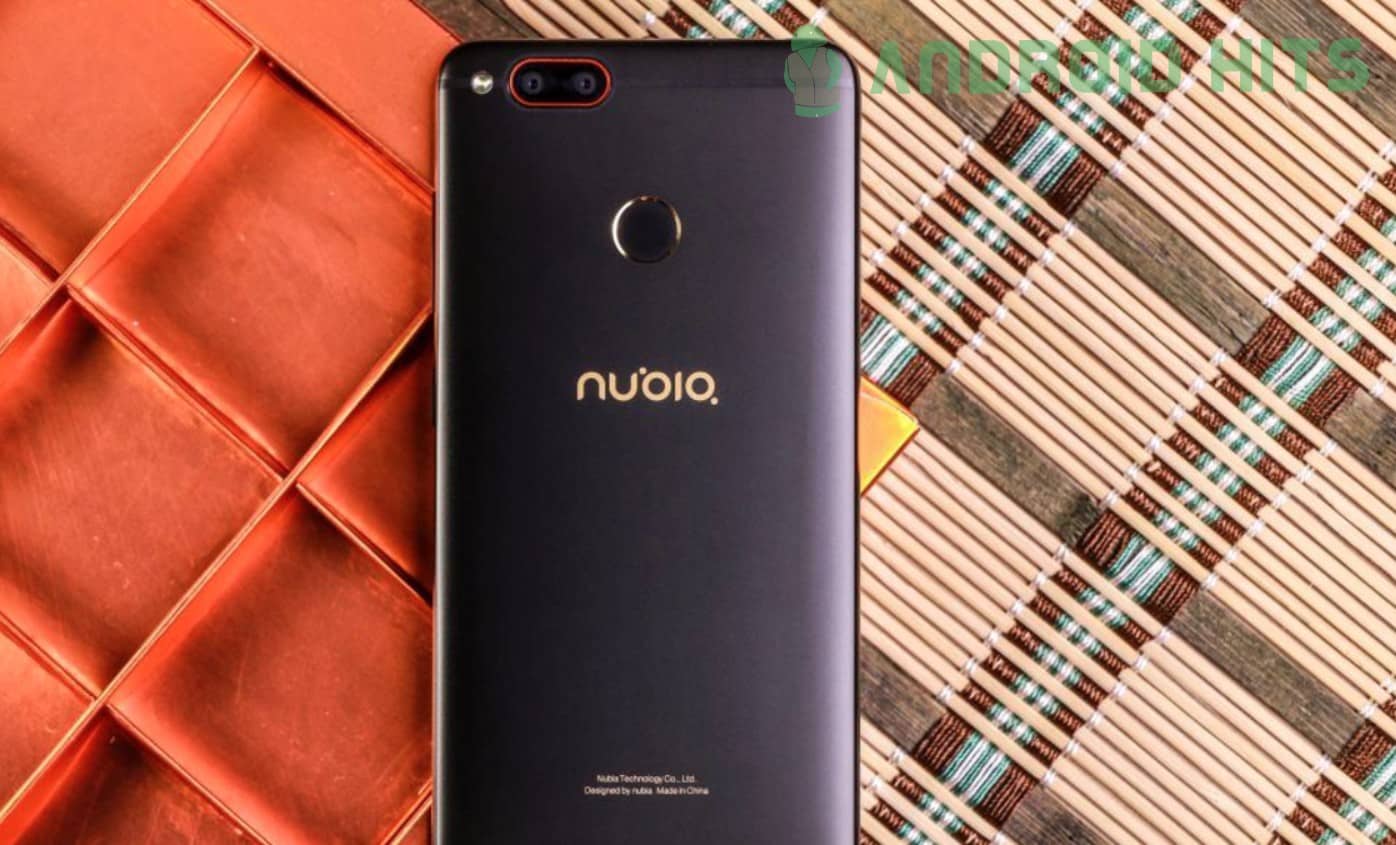 The Nubia Z17 Mini has an intriguing design. At first look, it does show resemblance to the iPhone 7 Plus (can’t blame them, everyone is now copying iPhone design). But the Z17 Mini has some exclusive tweaks in the design. The color selection and the gold plated fingerprint scanner ring look great in the crowd. As always, Nubia kept its incredible design language. The device feels compact and premium when holding. The device is a little bit slippery, and you may drop it. So you have to hold it carefully. The gold plating on the sides gives an additional beauty to the device. It features a full metal unibody, and it is very smooth. The corners are rounded, and have chamfered edges with a gold finish, adding a distinct look and feel the smartphone. This device doesn’t have a dedicated LED notification feature. But the home button has a light which acts as a notification alert. When you get any notification, it alerts you. 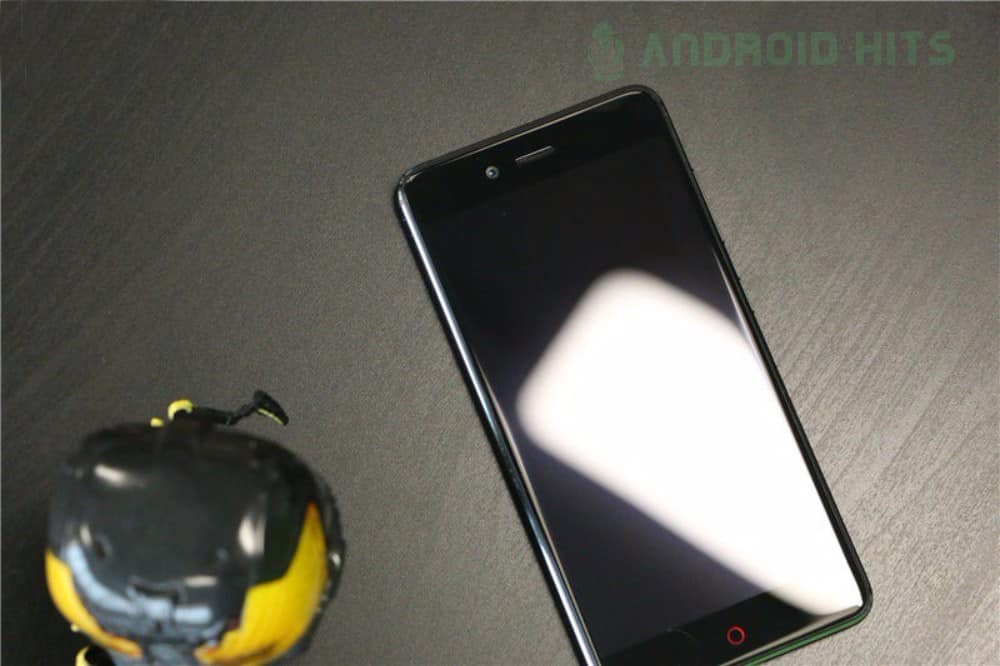 The dual camera placement on the back side is quite bumpy. But don’t worry, it does have sapphire glass protecting the camera lenses. So it won’t get damaged easily. The home button has a distinct red color circular ring which lights up when the display is on. The front is covered by the 5.2-inch full HD display. A 2.5D curved glass protects it. The display is very smooth and sharp. The full-HD resolution makes it a right choice under Rs. 20,000 segment. Nubia lets you adjust the color temperature and the saturation level. So you get complete control over your display. If you adjust it correctly, you will get an incredible experience.

The new Nubia Z17 Mini has a premium metal unibody. The build quality of the device is impressive as compared to the other models in the same category. As compared to the other models such as Vivo V5s, the Nubia Z17 Mini wins the game. It is far better than the V5s. The satin finish on the back is a bit slippery when used one-handed, but the texture holds up well against the bumps and scuffs of everyday use.

Nubia offers a 4GB of RAM with this device. It runs on a 64-bit Qualcomm Snapdragon 652 processor. Since the Snapdragon 652 follows the old 28nm process, it is not a power efficient chipset. So, even with a good performance, you may experience bad battery backup. It came with Coretex A72 cores and integrated Adreno 510 graphics on board. We will discuss the chipset in the performance section of this review. The device comes with a 64GB of internal storage, which is enough for a moderate usage. Also, it satisfies the pricing. The device supports expandable storage of up to 200GB using a microSD card. 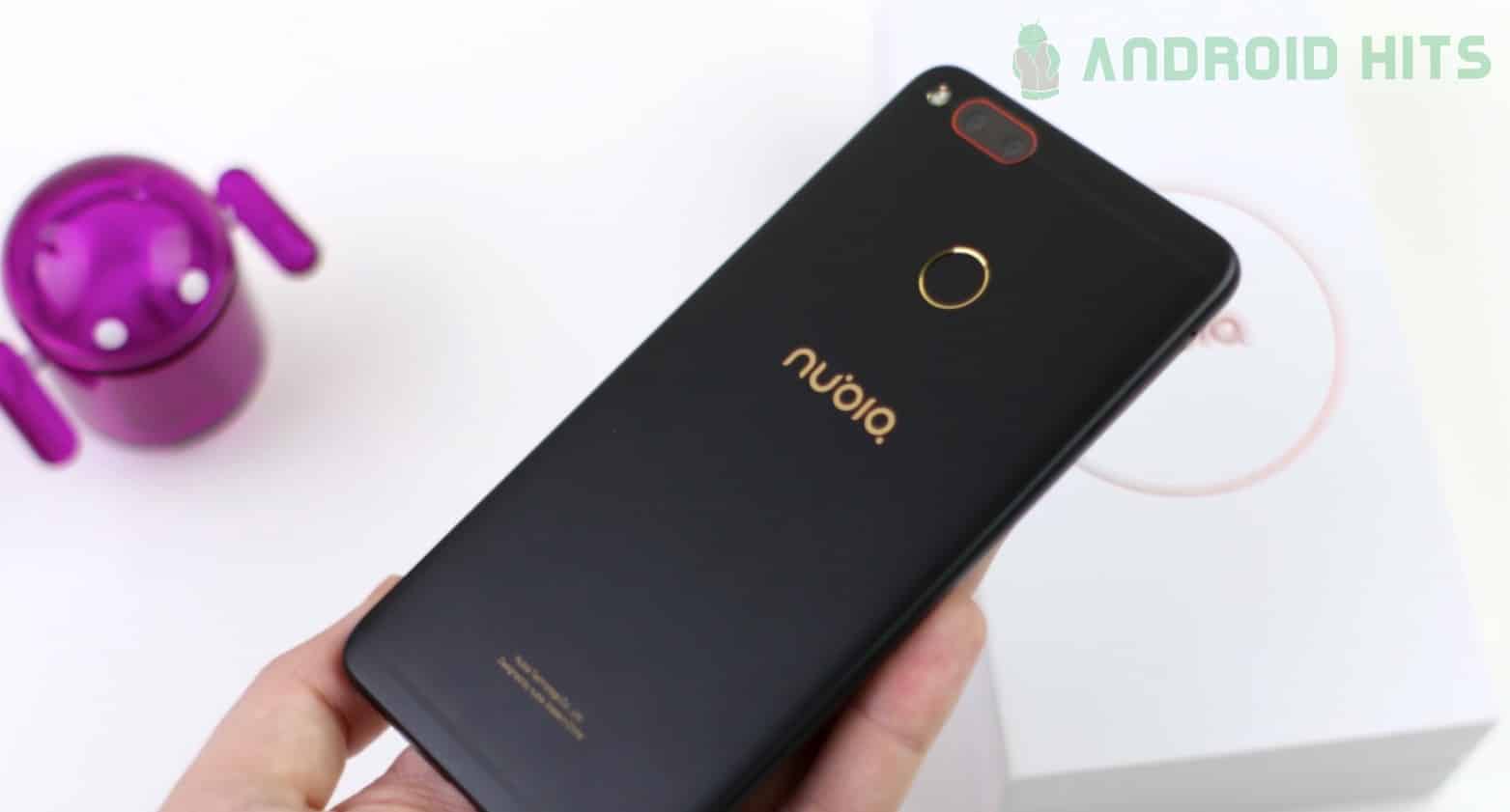 Nubia Z17 Mini is a dual SIM smartphone. The connectivity options include  Bluetooth 4.2, dual-band Wi-Fi 802.11ac, NFC, GPS, FM radio and USB-OTG. One of the biggest advantages of the device is the presence of NFC. It has all major sensors such as accelerometer, gyroscope, compass and light sensor. It supports 4G VoLTE connectivity.

Needless to say, the Snapdragon 652 chipset is capable of delivering good performance. It handles 4K video playback very smoothly. During our review, we never experienced any performance conflicts. At the same time, we loved the multitasking performance of the device. But the incomplete Nubia UI reduces the performance to an extent. The combination of Snapdragon 652 and the 4GB RAM increases the performance. I am a mobile game, and I play many high-end games on my smartphone. So I tried it on the Nubia Z17 Mini too. It works fine on small games, but sometimes, it lags a lot. If you are a gamer, it is not a recommended device.

We have conducted some benchmark tests and here is the result: 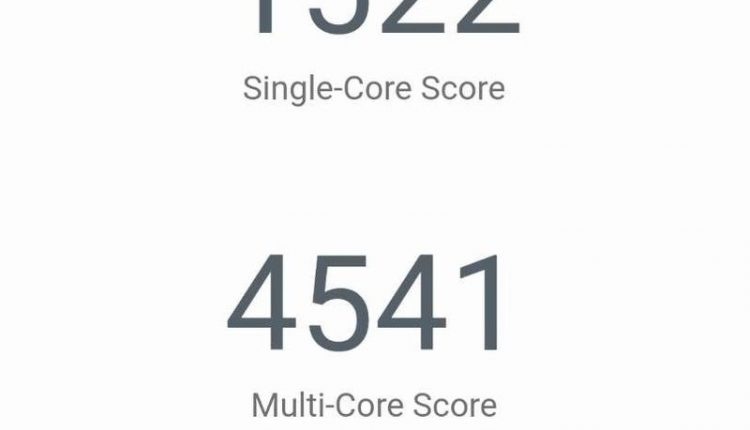 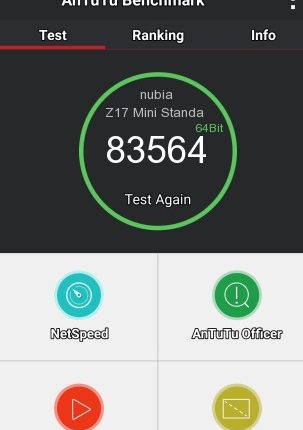 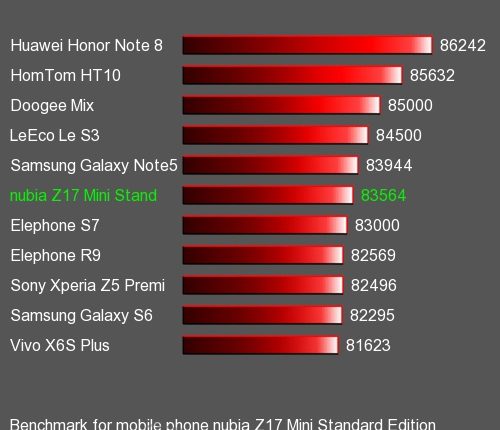 The worst part of the Nubia Z17 Mini Review is battery. The Nubia Z17 Mini has a terrible battery backup. One thing I hate most about this phone is the poor battery backup. The 2,950mAh battery failed to pass one day. I got battery low notification before the evening. It is mainly due to the old process Snapdragon 652 processor, which is not a power efficient processor. Nubia could have used the SD 625 instead of the 652. Also, the 2,950mAh is too low for a smartphone with this much features. 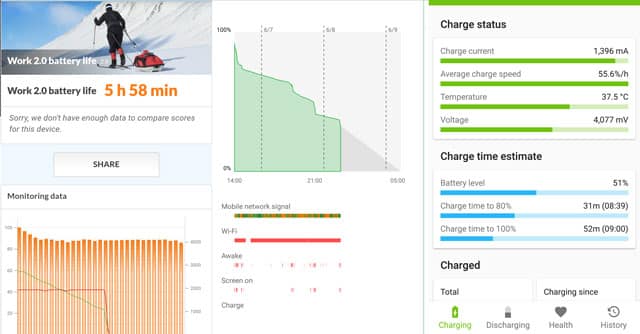 We don’t have battery charge to use all these features. I hate enabling power saver throughout the day. With a very careful usage, it can last up to 1 day. But if you use data, it will drain very quickly. Another problem is the lack of fast charging. Overall, the battery part of the Nubia Z17 Mini is a failure.

Nubia Z17 Mini runs on the Android 6.0.1 Marshmallow operating system out of the box. It is flavored by the Nubia UI 4.0. Yes, it is still on the old Marshmallow OS. We have the Nougat since almost eight months. But still, some new phones such as Nubia Z17 Mini comes with Marshmallow. Why don’t you change Nubia? Just like any Chinese ROMs, it has a single layered user interface. That means you won’t have any app drawers. If you want to access more features such as app drawer, you will have to download any third party launcher apps such as Nova, Google now, etc. The interface gets confusing when you enter the settings menu as even the simplest options such as the battery, storage, memory are inside the additional settings, rather than being up front in the main list. So the operating system part of the Z17 Mini is quite disappointing. But, there is a good thing about the Nubia UI. It comes with least number of bloatware. Custom UIs are mostly bloated with unwanted apps pre-installed. But the Nubia UI 3.0 has the universal Google apps and two other third party apps. The other apps include the Kika keyboard and the News Republic. The user interface is perfectly optimized for performance and multitasking.

The camera is one of the big highlights of the Z17 mini and to give it an edge over the competition. There are two 13-megapixel sensors at the back, with one being a monochrome, while the other sporting an RGB lens. Both the camera uses Sony IMX258 sensor, and there is also a sapphire glass protective lens, which is considered scratch proof. For the front, there is a 16-megapixel camera with 80-degree wide-angle lens for selfie and video calling.  This combination is meant to improve detail in photos, but unfortunately, the results aren’t very impressive when photos are seen on a larger display. The front-facing 16-megapixel camera is a capable shooter in daylight, and captures decent shots indoors, but with some amount of grain. Low-light selfies aren’t that great. An on-screen flash is present, but it doesn’t work as well as you want it to. The camera UI is pretty simple to use and comes loaded with different modes including Multi Exposure, Mono, macro, 3D, LightDraw, DNG and so on. So, it would be interesting to the overall performance of the camera in different lighting situations. 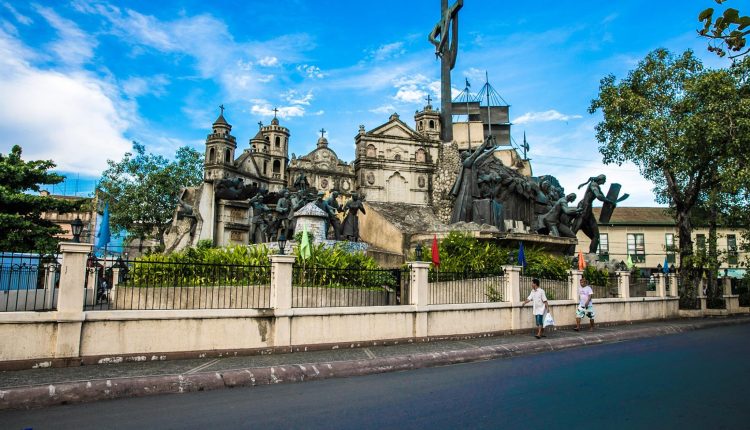 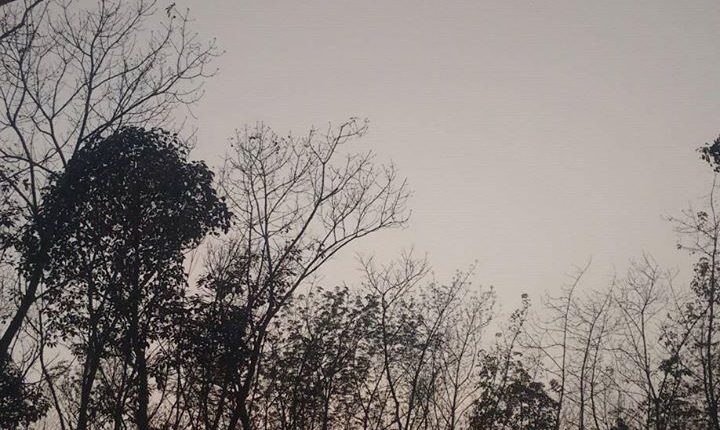 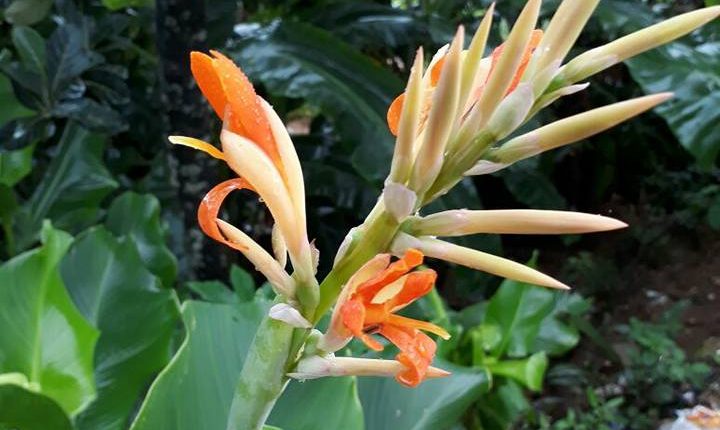 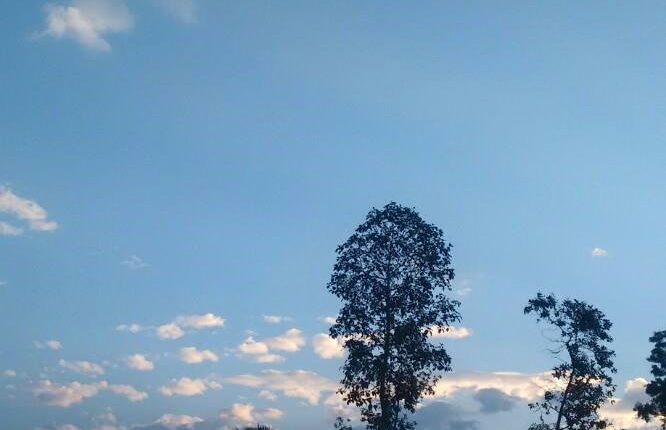 When considering the features offered, the Nubia Z17 Mini is a bit over priced at Rs. 19,999. You also have so many other devices to choose before you settle down with this model. For example spending just Rs. 18,825, you can grab an Honor 8 instead. Which is a better device overall than the Nubia Z17 Mini. Another thing is we can’t predict the future of this model. Nubia is known for discontinuing their models very quickly. 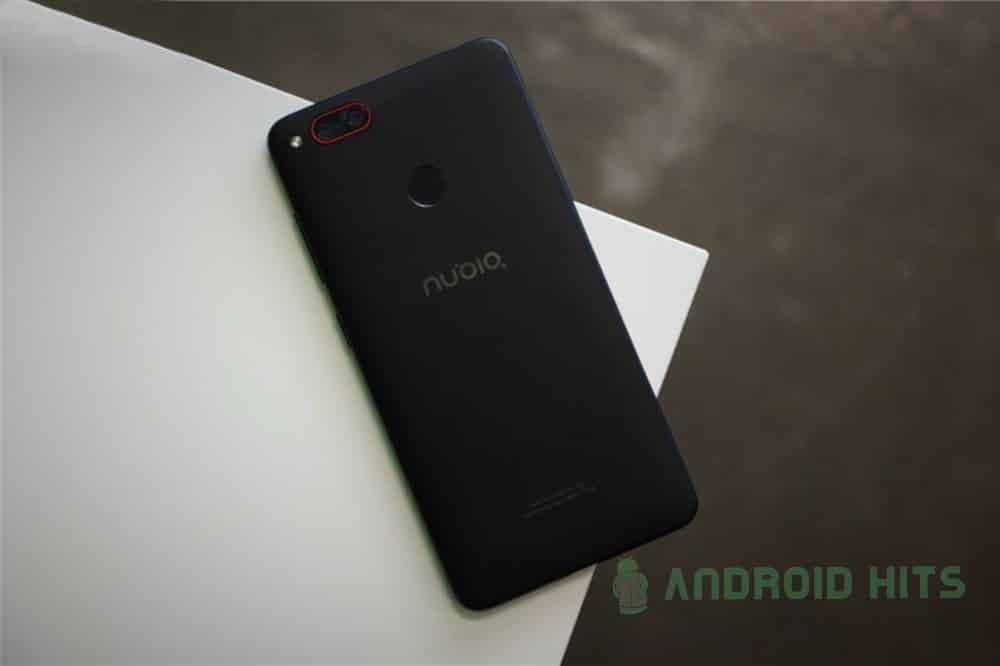 If you are looking for a smartphone with an attractive design and good display, Nubia Z17 Mini is a good choice for you. It has a poor battery backup and runs on an outdated operating system. So we don’t recommend this mode. The choice is up to you.

Share AndroidHits Nubia Z17 Mini Review with your friends and let us know your thoughts in the comment section below.

LG announces Q8, a small version of the V20